He built his own CMS tool and started his own consulting company when he was... 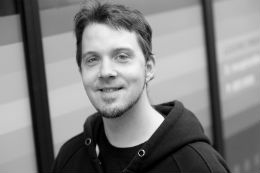 He built his own CMS tool and started his own consulting company when he was only 22 years old. Ten years down the track, Stig calls himself a problem-solver, artist, handyman and inventor. Although he is a Swede, his favourite language is not his mother tongue, but rather Ruby, because it is so weird and poetic. He has no drivers licence, because he thinks a real man doesn’t need one. And since he has no power over automobiles, he loves to have power over computers, seeing as “I could get the computer to do what I wanted.”

How and when did you get introduced to programming, and what made you stick with it?
When I was eleven I had a neighbor that was a hobby-nerd. Me and my friends used to play games on his ZX Spectrum. One day he taught me how to build silly programs that created random sentences. When I got my own computer, a Commodore 64, I created simple text adventures in basic that I let my friends play. I think I liked the feeling that I could get the computer to do exactly what I wanted with a relatively few instructions.

What does being a developer mean to you?
It's being the perfect blend of problem-solver, artist, handyman and inventor. Typically you have a task or problem to solve and you bring all your experience and techniques to find a solution. I like the metaphor that developing software is like building a house. For me, a developer isn't about being a programmer, it's much more. I have to be somewhat of a generalist and the purpose of my trade is not only the code. When developing applications I have to lift my eyes from the keyboard and take into account a lot of variables that will manifest into something great.

What programming languages can you write and if it is more than PHP, which one do you prefer and why?
I've been programming for long enough so the borders between languages gets blurry. But I would say that PHP is the one I 'speak' fluently. I have foraged into Turbo Pascal, Ruby, c, Perl, bash (yes, I count that as a language), Java and c++ whenever I find it interesting and usable. If I were to exclude PHP, I would most likely work with Ruby since it's such a weird, poetic and powerful language.

What was the first CMS you ever worked with?
The first CMS I worked with was my custom built CMS that I sold to clients. To be honest, I don't know if it could be called a CMS by today's standards, but it worked.

What other CMS tools or frameworks have you ever worked with aside from SilverStripe?
Professionally I've worked mostly with custom-built CMS's. But during the years I've been exposed to Drupal, Wordpress, Zend Framework, CakePHP, Symphony and numerous other smaller open-source projects and tools.

How long did you work with SilverStripe before you started working with us and how did you get introduced to the CMS?
I worked with the SilverStripe platform for about two years before I started here. I was part of a team that evaluated SilverStripe and finally migrated over from the company's old CMS.

How does the SilverStripe CMS and framework differentiate from the other tools you’ve worked with in the past?
It really has a unique focus on how to do things. It's more focused on pure data than many other CMS’s. SilverStripe thinks that everything can be boiled down to pure data and presented in different ways. SilverStripe means object oriented code and that means more fun for developers. This helps the developer to focus more on solving clients problems than trying to solve their own problems.

Why were you interested in working with SilverStripe?
To be honest, I just liked the attitude of the people I've talked to and the chance to contribute more to the framework itself. The founders know the code and contribute to it. And although SilverStripe works very professional with big clients, you still get this energetic start-up feeling.

Was it as expected? What do you like about working here?
Not as expected, it was better. I feel welcomed and that I feel valuable to the company, and know that I can throw an angry bird at the CEO from my desk.

You came a long way to work with us. What do you like about New Zealand?
Everything! The food, the people, nature, the silly flightless birds and of course, the All Blacks. Oh, I forgot how much I love it when the wind pushes street signs uphills. I like the diversity of New Zealand. Especially Wellington, it seems to be a melting pot for different cultures from all over the world.

Do you sense a lot of cultural differences?
Actually, no. I had some ‘lost in translation' moments, but not many, and most of them a pleasant difference. My life in New Zealand is quite similar to the life I had in Sweden.

What do you miss about home?
My friends, a proper Internet connection and knäckebröd (a hard bread that mostly consists of rye).

What does the future hold for SilverStripe?
It will be prosperous enough to buy the moon so I don't have to telecommute.

What’s your most favorite joke?
A SQL query walks into a bar and sees two tables. He walks up to them and says 'can I join you?'

If we’ve got you interested in working for SilverStripe in New Zealand, then check out our careers site
http://www.silverstripe.com/about-us/careers/