The enduring value of unit tests

SilverStripe developer Jess Champion recently presented a talk at Decompress 2018. She summarises her talk on unit testing and answers the question, why do we do automated testing?

We spend a lot of time thinking and talking about how to write better code, but much less time on how to write better tests. Today I’ll examine how unit tests are a critical component of robust, stable and maintainable software across the full lifecycle. We'll examine some of the theory around unit testing and explain how it adds business value and supports agile development practices. I will also give opinionated practical advice for writing robust test suites.

Why do we do automated testing?

By reducing the cost of testing we reduce the cost of change. Making it easier and less risky to make changes, refactor and build enhancements. Automated testing also helps with maintenance work such as framework upgrades or security patching, as they can be used to validate that the key functionality of the application still functions as expected after the upgrade.
Reducing the cost of change helps to increases the lifespan of your solution - allowing you to keep working with what you have for longer.

A robust automated test suite is essential to Continuous Integration. It helps you to ship faster and more often, with greater confidence that there are no unintended breakages or side effects.

This diagram; adapted from Martin Fowler’s test pyramid; illustrates a well-balanced test pyramid; made up of unit, integration and UI tests. Generally, the cost to create, maintain and run the test trends up. While the time taken, to run the tests trends down. 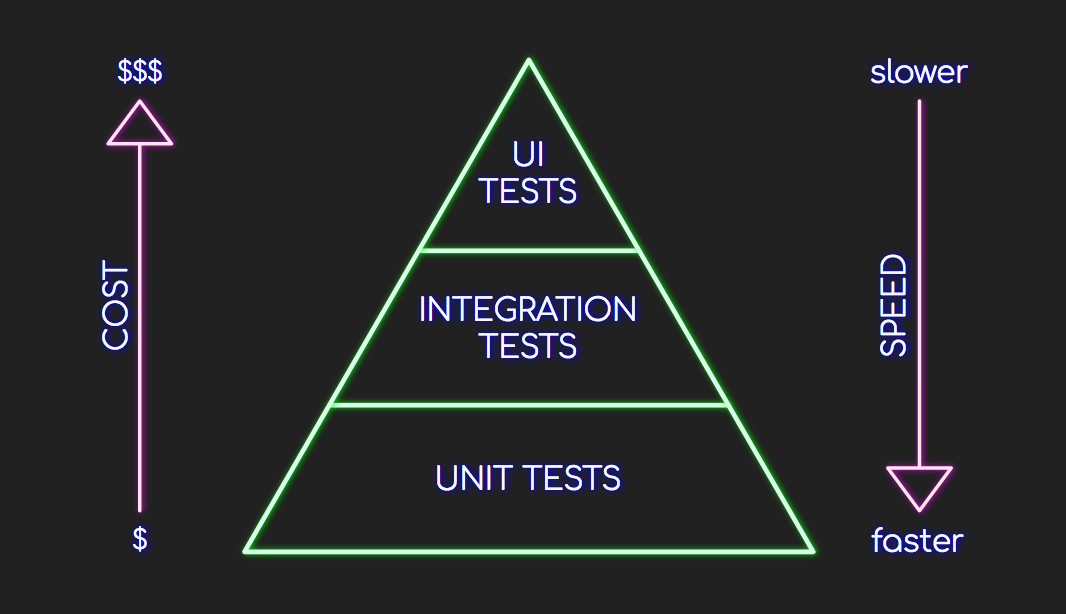 Test an isolated unit of code (like a function or a class), they don’t rely on external resources, such as an API or database. Unit tests are both fast and cheap, which is why we look to them to create a solid base for our test harness. Saving the more complex test scenarios for integration or UI tests.

Tests how the parts of the system work together. They may use a database, have network requests or talk to a real API.

UI tests (or Functional, or end to end, or use case tests, or behaviour tests) test the application through automated UI interactions. They generally have fewer scenarios covering more functionality per test and often automate testing a realistic use case; for example, login, and then check your balance. They may rely on external resources.

What do I need to test?

Defining the scope of your tests can be one of the hardest things to figure out when you first start unit testing. I find taking a behaviour driven development approach to unit testing helps me focus my testing strategy: test the behaviours the code performs through the public interface.

In BDD - You write tests (aka specs) for each behaviour that the code performs or needs to perform rather than for each method. Each spec describes - in natural language - the behaviour of the code being tested. Specs become a part of the documentation for the code base.

When tests fail, the description helps you identify what’s broken. BDD frameworks like jasmine make this really easy as specs are part of the syntax. Below is an example of jasmine syntax

Spec-ing up is the process of analysing the code under test to determine ‘what’ it does and writing out a list of empty tests for each behaviour.

When you’re spec-ing up - you want to try to cover all possible paths through the code. This means accounting for error handling, invalid parameters, unexpected data and edge cases. Testing these ‘sad’ paths helps us to iron out a lot of bugs and oversights before they get to production, making your solution more robust.

Once we have our complete list of specs, we figure out how to test those behaviours through our public interface.

If you’re testing components the public interface may include UI events like click and input. You can test these programmatically triggering the events, there are libraries such as enzyme for React or vue-test-utils to help with this.

We control the paths the tests take by piping specific values into the public interface which call our private functions. We then assert that the publicly visible properties were affected as we intended.

Now that you’ve invested all this time and energy into your test harness–you’ll want to keep it in good condition. Some quick tips to close: The material in this blog was originally written for a presentation at decompress 2018  conference. That talk covers further topics including; test-driven development and test doubles. You can check out the video here (it was my first talk - I was pretty nervous).

Special thanks to SilverStripe for generously providing the travel sponsorship that helped me to attend and speak.

About the author
Jess Champion

With a background spanning product development, operations and project delivery, Jess has developed a passionate focus on the quality and maintainability of software. While she can happily work across the full stack, Jess has a passion for all things frontend, and is always looking for ways to leverage new technologies to craft immersive digital experiences.