In this introductory lesson, we cover installing a local webserver (e.g. MAMP), installing and using Composer, and configuring an _ss_environment.php file. Having a finely tuned local environment for your projects will help you work faster and with less redundancy.

Up and Running: Setting up a local SilverStripe dev environment

SilverStripe is a PHP-based application that connects to a database, so in order to run it, you'll need a webserver. You won't want to be doing all of your development on a remote environment, so setting up a local webserver is highly recommended. If you're running OSX or Linux, you probably have all the tools you need already installed on your system, but if you're just starting out, you might find it easier to get a pre-configured package that just gets everything going for you in a single click.

There are a few local webservers out there to choose from. If you're using a Mac, you probably want MAMP. Windows users may prefer WAMP. Both of these tools are free. Just for clarity, the AMP in both of these acronyms stands for Apache, MySQL, PHP, in case you didn't know what you were getting into.

This tutorial will focus on using MAMP, but be aware that all of these bundled web servers operate and install very similarly.

On the MAMP web page, just click the Download link and install it. They'll try to talk you into the pro version, which comes at a cost. If you're just starting out, the free version will serve you just fine. MAMP installs to our Applications folder, not as an application, but rather as another folder. If we take a peek inside, we'll find all the modules, libraries, and configuration files that create the server we'll be running. We just click on the MAMP package, and it pulls up a panel.

Notice in the upper right corner that the Apache server and MySQL server are off. We can turn these on simply by clicking Start servers.

When the servers turn on MAMP lets us know that it was successful by rendering a web page in the browser. Take a close note of the host name for this web page, http://localhost:8888. This is where all of your projects will run when using MAMP.

MAMP is fairly configurable. The Pro version is more so. You can see that we can tweak things, like the port that runs our sites and the version of PHP. Most importantly, take note of the document root that MAMP is using. By default it runs in the Applications/MAMP/htdocs folder. This is where all the sites are going to run.

So let's just jump into that folder in the terminal and see if we can create a working PHP file. I'll make a script that renders some text to the browser.

If we go to http://localhost:8888/test.php, you'll see that it is executing the script properly, and we now have a working local web server.

Before we get into installing Composer, we should probably go over what exactly Composer is and how it works.

What is Composer, and why do I need it?

Composer is a package manager for PHP. Package managers are increasingly popular these days, especially for front-end libraries. You may have heard of NPM or Bower. At their most fundamental level, package managers are simply abstractions of a source code repository. They obscure all the minute details about where the projects live and what branches are available, and they allow you to simply refer to packages semantically by name and by version number.

A key feature of Composer is that it resolves dependencies. When one module requires one or more other modules in order to work properly, Composer will sort all that out and pull down everything you need. Further, Composer applies version constraints. So if a package requires a module that doesn't work with something you already have installed, it will apprise you of that conflict and halt the installation so that your project doesn't break.

You might be wondering, "Why can't I just go and download the modules and install them manually?" Well, let's use an example SilverStripe project without Composer to illustrate why that isn't always a good choice.

Let's say you want to get a gallery module for your website. You go out to some web page, download it, and drop it into your project. When you try to run the application, the module complains that it's missing the slideshow module, which is integral to the gallery module. Now your project is hosed. You go and find the slideshow module. After some digging, you're able to track it down. You drop it in, hoping this will make your gallery module happy.

Now we have a new problem. The slideshow module is incompatible with the version of SilverStripe that we're running. You can see where this is going. All the players in your project don't get along, and your website blows up.

Installing packages with Composer solves all these issues because you simply execute a nice, declarative command, asking to install a package and a specific version, and it handles all the orchestration for you.

This is by no means a magic bullet. You will still have to resolve conflicts, but it will tell you what those conflicts are, and it won't let your project exist in a state with incompatibilities.

Installing Composer is just a matter of running two commands:

These commands might look a little foreign to you if you're new to the terminal. If you need more information, SilverStripe documentation about Composer.

Let's run the first command, which installs Composer. It doesn't matter where in the file system we run this command.

The second command will move the Composer executable to a place where it's globally accessible, so we can just run Composer anywhere.

Let's create a SilverStripe project using Composer. Because this is a new project, we'll use the create-project command and point Composer at the silverstripe/installer. We'll specify a project name of example. Now, if we go to the URL http://localhost:8888/example, we see an install page. It's full of red errors that are telling us that the install isn't going to work, so let's go through this and see if we can sort it out. One thing that it's complaining about is that there isn't enough information to connect to the database. So let's fill out the database username and password. If you're using MAMP, the default user for MySQL is username root with password root.

Let's just change the database name to something a little bit more meaningful. We'll call it SS_example, because this is the project example.

Lastly, we can create an admin account. Let's specify a password. That'll be the account we use to connect to the CMS. We'll recheck the requirements and install SilverStripe. Now that the installation is complete, SilverStripe is going to prompt you to delete the install files, as they are a security risk. Click on that, and it will authenticate you before moving forward. Provide that admin password you chose earlier.

Now that we've installed SilverStripe, let's finely tune our development environment so we can get things working a little bit faster.

It can also include other application settings. You might have API keys or email addresses in there that you want to specify as globally accessible by all projects.

Because _ss_environment.php is an executable PHP file, it can follow logic. So you can actually create a dynamic configuration by looking at something like the HTTP host that's coming in or the remote IP, and make decisions on the fly about how you want to configure the project.

Most importantly, the _ss_environment.php file does not have to ship with the project. It can live outside the web root, outside of source control. When you deploy this project from your local environment to somewhere else, that remote environment might have its own configuration, so having the file outside the project means you don't have to worry about overriding settings.

Let's take a look at an example directory structure, where we have an htdocs folder, and three example projects underneath it.

We'll put the _ss_environment.php file in htdocs. It will cascade its settings down to project A, B, and C.

You can place an SS environment file in, say project B, and it will override the parent _ss_environment.php file.

There is a way to merge the settings so that you get some from the project level, and others are inherited, but that requires some custom coding, and it's probably something for another tutorial.

In a typical _ss_environment.php file, you definitely want to define the database server, database username and database password. Everything is defined in constants.

Lastly, you'll probably want to define the SS environment type as dev, so you can take advantage of all the debugging tools and get some verbose errors.

So let's go to that example2 URL (http://localhost:8888/example2). The install page comes up again, but it looks slightly different. Some of the fields have been populated for you, such as the database username and password, but you still have to provide a database name. Let's use SS_example2. Also, provide that admin password again.

Click "Install SilverStripe," and once again, clear out those install files.

Let's now take this a step further. There are some more things we want to throw into our _ss_environment.php file. We can use SS_DATABASE_CHOOSE_NAME to tell SilverStripe to intelligently determine a database name so that you don't have to. It will look at the filesystem, see where the project is installed, and choose a database name based on that.

Also, you can specify the default admin username and password. For local development, you're probably not too concerned about security. So having something easy to remember, like root/root, is just fine.

Another setting you might want to turn on is SS_SEND_ALL_EMAILS_TO. If you provide your email address here it will force all emails to go to you, instead of to the places that your application might be sending them, which could include a client or anyone else who you don't want getting your tests. By applying this setting, it will force email to go to you, no matter what to address you've specified, so that's very useful in development mode.

For a full list of settings you can go to the docs and just look up environment management There are probably a dozen or so other settings you can throw in here. Some are more useful than others. Have a quick look through there because you might find something that's really useful to you.

Let's save the changes to _ss_environment.php, and apply those new settings.

When we go to the http://localhost:8888/example3 URL, you'll notice that we bypass the install page. That's because SilverStripe has learned everything it needed to know about this project from _ss_environment.php.

This is a really quick way is to light up a project and do some testing. You can just throw this project away when you're done and do it again, and you don't have to go through that install process every single time. _ss_environment.php comes in really useful here, as it applies all the settings you want for every single project.

We're now off and running with a local development environment for SilverStripe development.

Get started building your first SilverStripe website with our series of lessons. 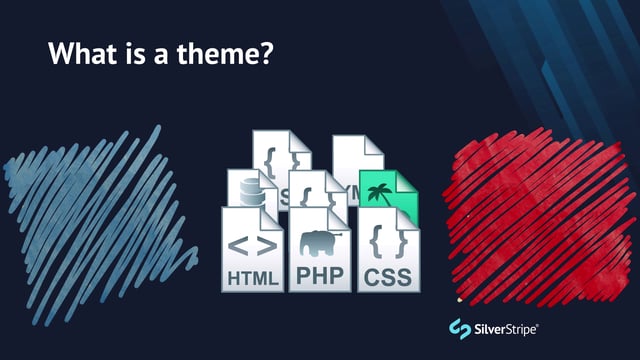 In this tutorial, we’ll cover how to build your first theme in SilverStripe. The SilverStripe installer ships with its own default theme -- Simple, but more... 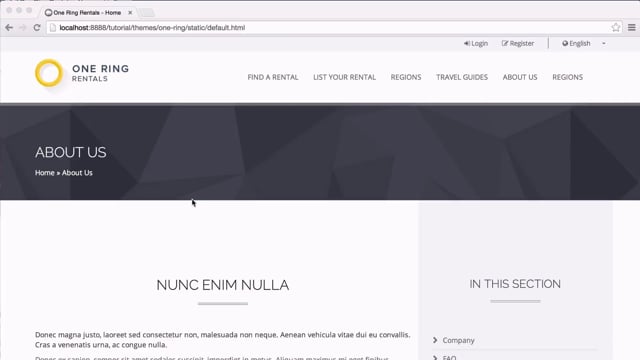 Migrating static templates into your theme

In this tutorial, we’ll migrate a static site into your SilverStripe project. HTML, CSS, and JavaScript will provide a nice common ground and starting point for... 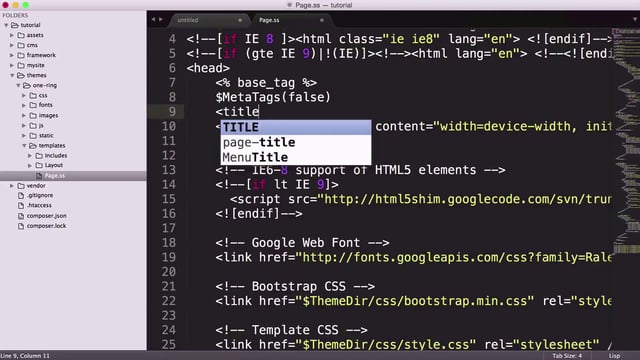 In this tutorial, we’ll start using SilverStripe’s native template syntax to inject dynamic content into our site, such as navigation, page titles, CMS content, and...